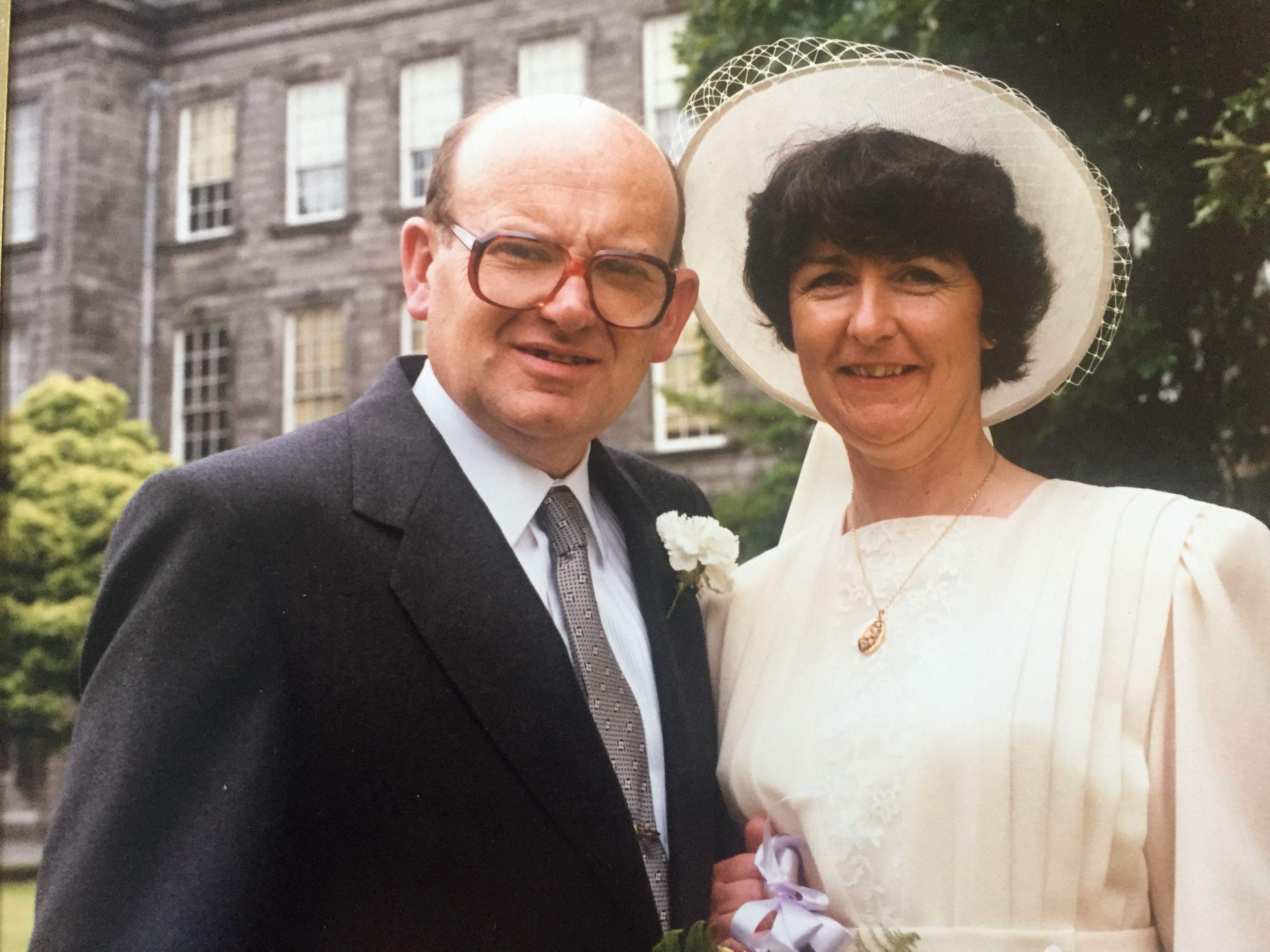 Roy and Anne on their Wedding day in the grounds of trinity College Dublin.

My Gift for the Future…..

My Name is Roy Brown I am a retired Trinity College Chemistry lecturer.   My wife Anne is living with dementia.  Anne moved into Avoca Lodge in St Joseph’s Shankill last summer.

Life can throw curve balls at any time, I first met Anne when I was in my early fifties certainly a confirmed bachelor.   Obviously at that stage the issue for me was more “Mission Impossible” than “Cherchez la Femme”.
I remember it was late afternoon in mid January and there was deep snow all around. I was waiting to cross the road to Pearse station when a “vision of loveliness” passed in front of me. I was immediately smitten and followed the lady into the station, I had to speak with her, while this may not be the most appropriate way to approach ones true love it worked for me!  The snow made it easier to start a conversation and the conversations kept going, throughout a 18 months courtship.

Time marching on, I went to Anne’s home to address her father. “James Joseph Patrick Aloysius O’Loughlin, I love your daughter sir and I wish to take her hand in marriage”, “Can you keep her in the style to which she has become accustomed?” he replied.

I have done my best to do so ever since.

The vision of loveliness and Big Bad Roy Brown said ‘I do’ on 10th ofAugust 1988.  Not long after the honeymoon it became apparent that my mother in law’s health was declining which developed over time into an advanced dementia.  We looked after her as best we could.

We have enjoyed a lot of good times together over the years but unfortunately Anne has not enjoyed good health and was assailed by two occurrences cancer.

Over the last number of years, Anne’s memory began to fail and it soon became apparent that Anne was going down the same road as her mother. But to put the” tin hat” on it, Anne started to suffer from “Temporal Arteritis”. The massive doses of steroid to counter the condition knocked Anne sideways.

Anne ended up spending over a month in hospital. When Anne emerged, the social worker was talking “Care Home” but I was talking “Home Care”. I took Anne home but on the advice of the professionals put her name down in several nursing homes just in case.

We struggled on at home for about two years. Anne has a sister Patricia who lives in Spain and a cousin who lives in Sligo. Anne’s brother Jim is deceased.  With no children we have no immediate family to help.

During that time, the very dedicated public health nurse got Anne into Saint Joseph’s for a week of respite and we were very lucky then to have a place three days per week in day care.

This all went very well but we were losing ground at home. It was getting more and more difficult for me to fulfil my promise to Anne’s father.

One day at Saint Joseph’s I met red haired lady with an air of authority who introduced herself as the director of nursing. I seized the opportunity to avail of her knowledge and she talked to me about our problems and kindly agreed to have an assessment carried  out for Anne. About a month later Anne was offered to make Saint Joseph’s her permanent home.  I took several deep breaths and said “Yes thank you”. 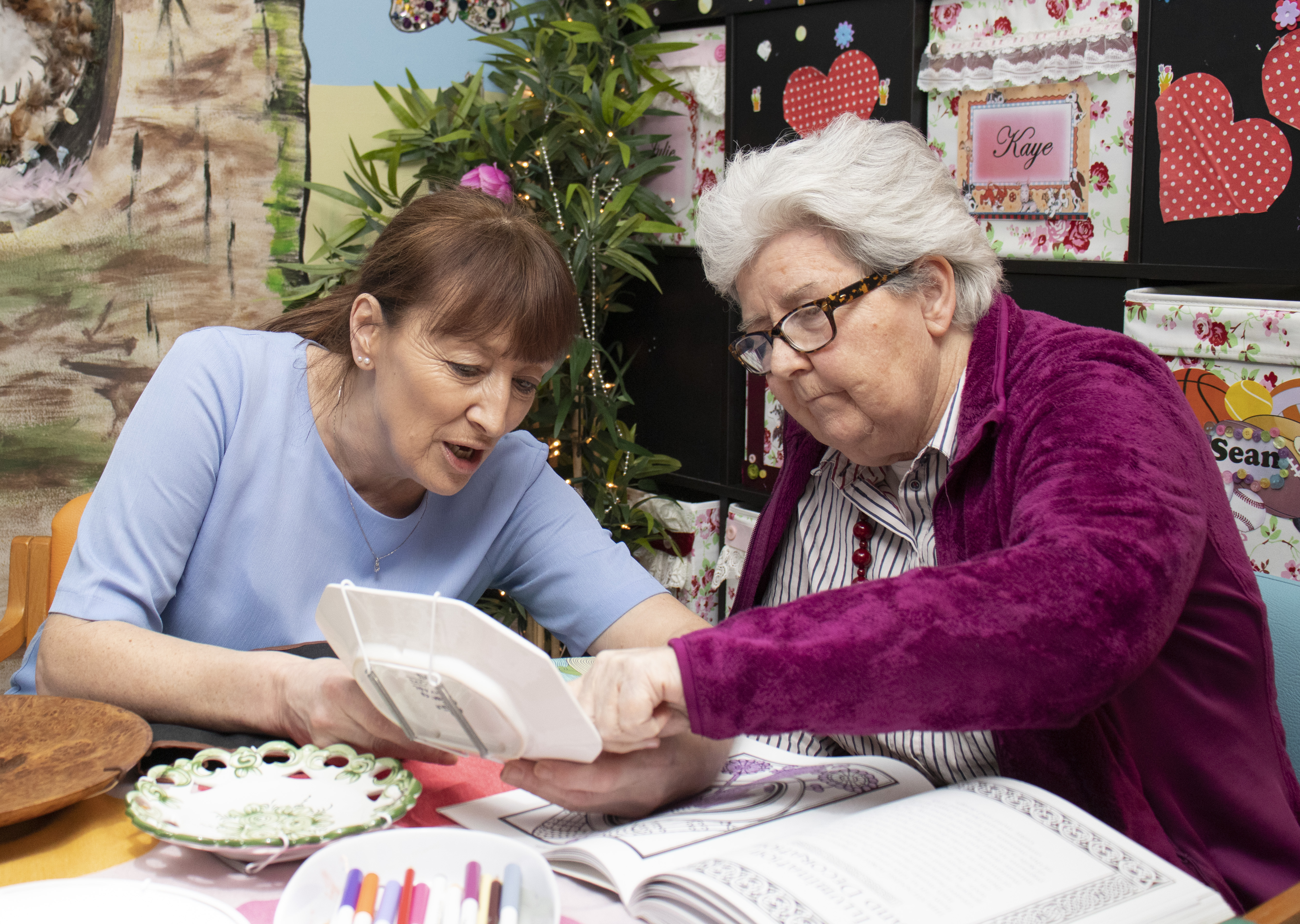 The day Anne moved in to Saint Joseph’s was difficult for me but neighbours and friends were very kind.   One of the excellent carers on duty looked after Anne while I beat a hasty retreat. Anne has been looked after with kindness and love ever since.

A remarkable thing about Saint Joseph’s is that everyone is helpful, cheerful and kind, not just the nurses and carers.

It is Anne who takes the lead in what she wishes to do during the day, they go with the flow with her and connect with her in a way that I no longer could do at home for her.

But it is not just Anne who is receiving the best care around, all the families and relatives as well are welcomed into the Saint Joseph’s family. I myself have at least twice as many friends now compared to before we were both embraced into the care of the team.

Friends who visit Anne are very thrilled, as was Anne’s sister when she visited from Spain.  People say that there is always something going on, sometimes Anne is too busy to see me!

My favourite quote is from a certain doctor. “If I were sick, I would want the nurses here looking after me”! So would I, sick or well.

When Anne was at home I was worried about one thing in particular. What would happen to Anne if I succumbed to the dreaded lurgy or was thrown under a bus? Now that worry for me is completely gone. I know that Anne will be looked after in the best possible way, even in the event of what my former students would regard as my all-too-long awaited demise!

We have been lucky to be a part of the Saint Joseph’s family, so I have pledged to leave a legacy in my will to ensure that the team in Saint Joseph’s can keep caring this way long into the future.  It is lovely for me to know that I will help people, even after I am no longer here, and I know Anne would feel the same.

Mrs Monica Brosnan, cutting the ribbon on the new Day Care garden in memory of her husband Dr Bill Brosnan.

Dr Bill Brosnan, was a day care attendee at Saint Joseph’s and enjoyed many happy days taking part in meaningful activities.  It also gave daily respite to his wife Monica, and gave her the chance to revive herself and continue caring for Bill at home.

He had allocated money to be donated to a charity of his wife’s choosing in his will.

Monica, thought long and hard where the money would benefit most and knew that donating the money to Saint Josephs’ to complete a garden area for day care would be a wonderful way to commemorate Bill’s life.

Monica, officially opened the garden in Bill’s name in the summer of 2017.

Bill and Monica, have left a wonderful legacy to all those people we care for in a our day care programme.  there is now an enclosed garden, with raised beds, sensory planting and a wonderful social area with seating to be enjoyed on those warmer days!

Of course, family must be taken care of, but gifts in memory of, or pre planned in your will are so valuable and means your generosity lives on in your memory.

Of course your loved ones come first, but just a small gift in your Will could help provide much needed services for people living with Dementia in South Dublin and North Wicklow

The idea of making a Will is something, which may make us feel uncomfortable. Realistically however, it is something that all of us should do at an early age to ease the burden of the loved ones we leave behind.

A gift left in a Will is simply a means of giving something back. It provides you with the opportunity to ensure that your possessions and finances are divided up according to your wishes. It is about remembering the people and the causes you care about.

Leaving a gift in your Will is straight forward and is something that everyone can do.

To find out more about how to leave a gift in your Will to Saint Joseph’s Shankill, contact Siobhan Grant at siobhan.grant@sjog.ie

Our Commitment to You

As a registered Irish charity, St Joseph’s Shankill understands the seriousness of the practice of fundraising and we recognise fully our responsibility to our donors.  We are fully committed to achieving the standards contained within the Statement of Guiding Principles for Fundraising.  And you can access our donor charter here; Saint Joseph Donor Committment

We are also a member of Charities Institute Ireland and registered with the Charities Regulatory Authority.