A promise not forgotten 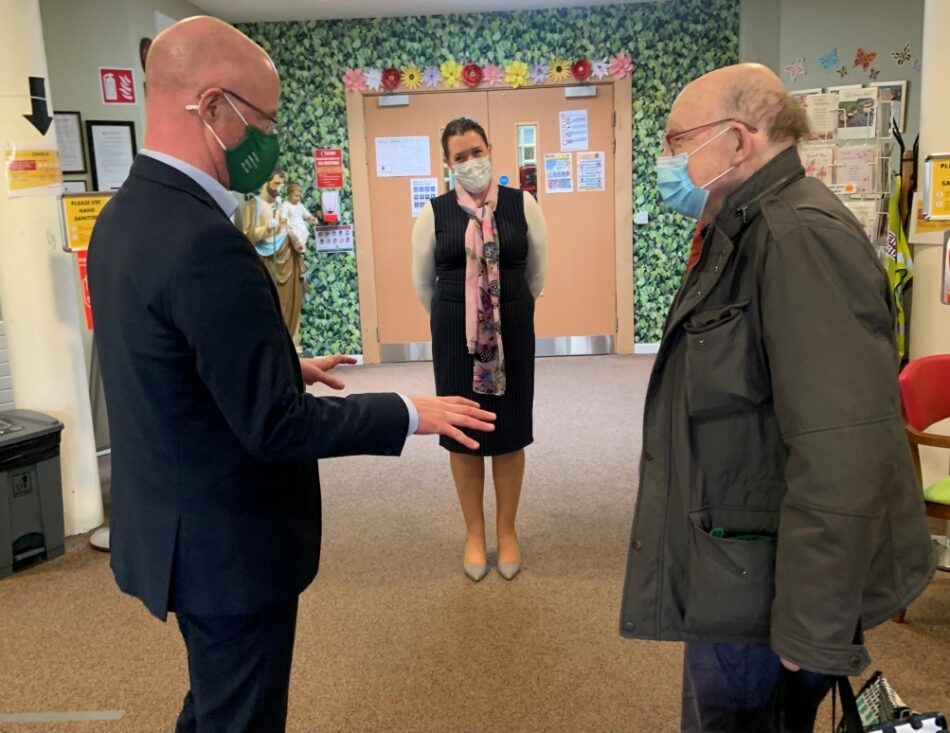 01 Apr A promise not forgotten

Posted at 17:14h in News and Events by Siobhan Grant
0 Likes
Share

On Friday 11 March, Minister for Health, Stephen Donnelly took the opportunity to come to meet the team to recognise this significant milestone.

Minister Donnelly thanked the Saint Joseph’s care team for continuing to operate the service in the face of financial difficulties and paid tribute to the frontline workers for working under such extreme conditions during this Covid 19 pandemic.

The Minister also reiterated his long held view that the social, person centred model of care for dementia which is in place at Saint Joseph’s should be replicated throughout the country.

Family member Roy Brown met Minister Donnelly on arrival and personally thanked him saying “it was the best Christmas present he could have wished for that an agreement had been made with the HSE and what I call ‘Ireland’s Greatest Nursing Home’”.

Earlier in the week a delegation from Saint Joseph’s were invited to the Seanad Éireann Debate about brain health and dementia, and were lucky to enjoy a short tour of Leinster House by Deputy Cormac Devlin TD.  The debate was chaired by Senator Fiona O’Loughlin and in the presence of Minister Mary Butler, Minister of State for Older Persons and Mental Health.  Minister Butler had worked with Minister Donnelly and the HSE to ensure an agreement was reached for Saint Joseph’s and the people in their care.

Saint John of God Hospital and Saint Joseph’s Chief Executive; Emma Balmaine said, “We have come through difficult times financially and throughout this pandemic but we were and always will be committed to meeting the needs of those we care for in the best way possible.  We can now look to the future together with optimism and a sense of renewal and create new opportunities to reach out and support more people living with dementia in our community and throughout the island of Ireland in the manner of our founder Saint John of God.”

She continued “We are very grateful to all the politicians past and present who engaged with us and brought our case to national attention and especially to Minister Donnelly who brought our case to the gates of Leinster House in 2019 and fulfilled his election promise to keep Saint Joseph’s open.